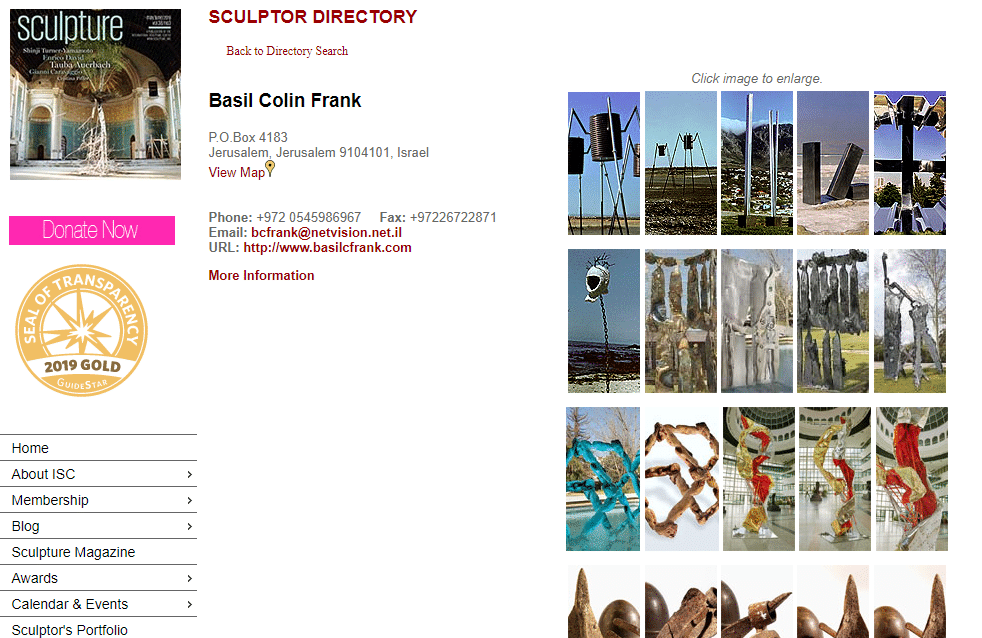 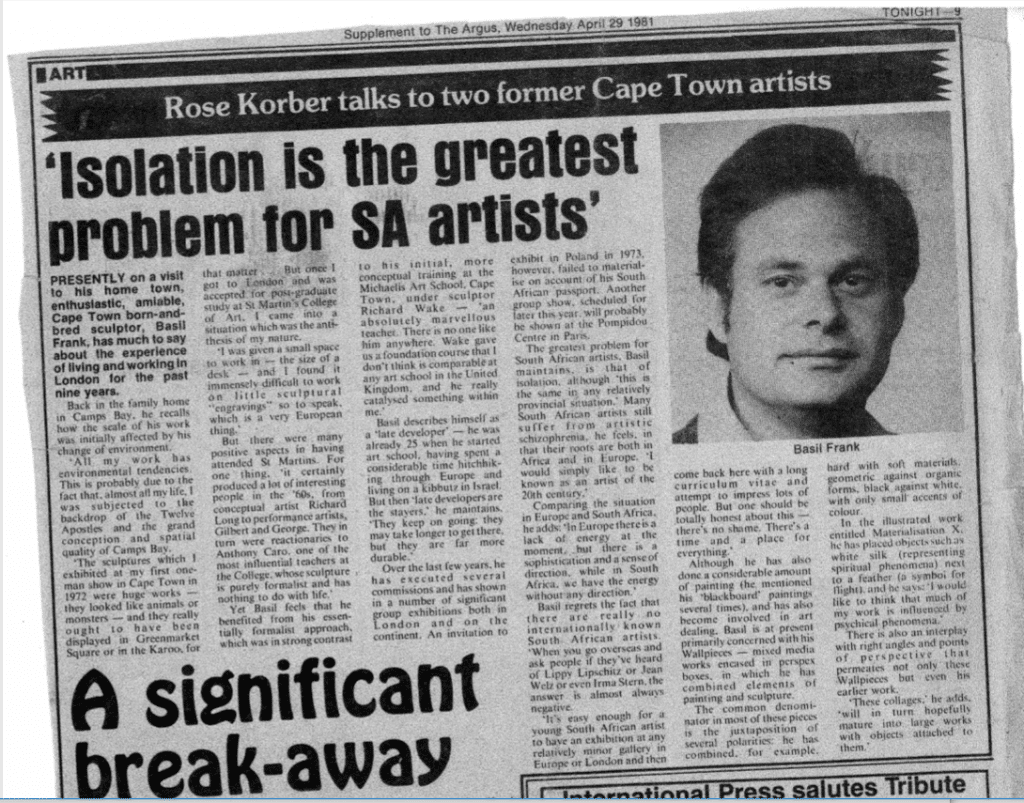 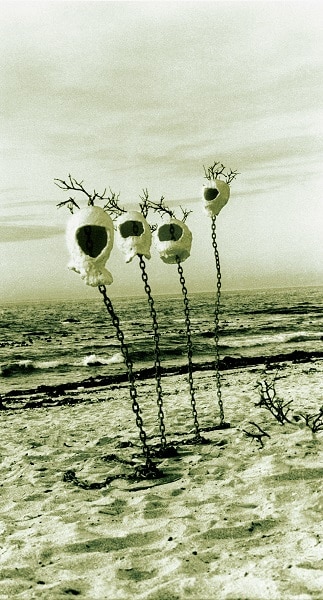 Frank always finds his public. During the Biennale in Beijing in 2005, visitors lined up three rows deep around the photographs of his installations on the seashore. He exhibits all over the world, with one-man shows in Kapstadt, London, Los Angeles, New York – and of course, Jerusalem.

[German text translated from the English by Gerhard Charles Rump 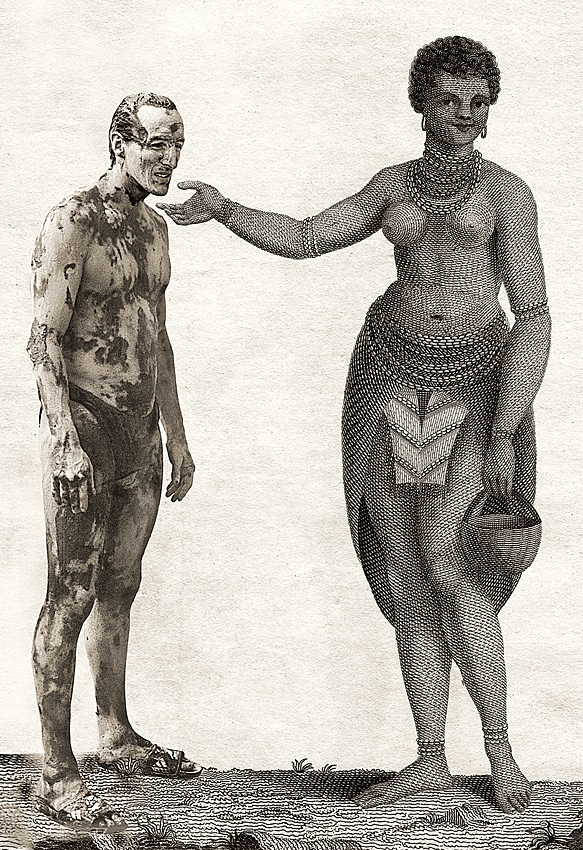 Room B has lined winner. The Grand Prize winner Watanabe Yuuko [World], a blue denim jacket with a vivid Ikeda Midori’s award-winning story begins in Aomori Broadcasting Corporation [Lisa] I got prints, won the Special Jury Prize of the [THE SAARTJE Basil Colin Frank BAARTMAN STORY] and impressed. Basil Colin Frank’s work in particular, was what made me think about it, as crafts beautiful and intricate designs that take a close look, away (from the outside through the glass out of the venue) also stand to see men and women The perfect balance and posture and position that I liked very much. That the woman depicted in this work is painted in white men and African natives of the Dead Sea mud. More women, who koi carp is a spectacle being taken to London from South Africa in 1810, was dissected died in Paris in 1816 and eventually, the body was conducted the funeral in South Africa last in 2002. or how it is. She works in a beauty depicted in a healthy, but I’m very attractive, I also was at the mercy of women in the tragedies of slavery and former 凄Maji think of his life. 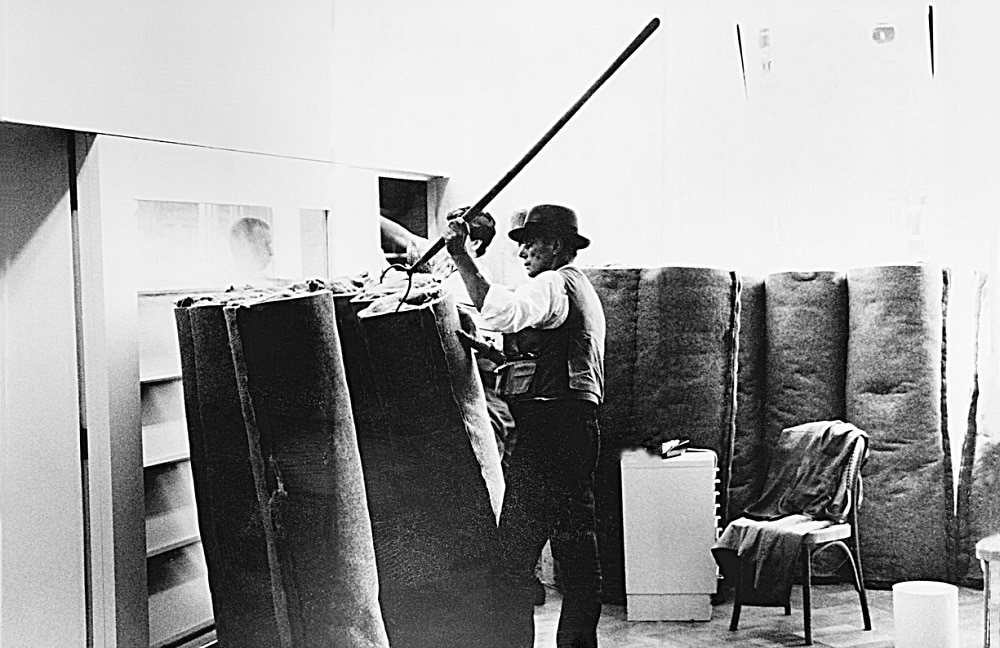 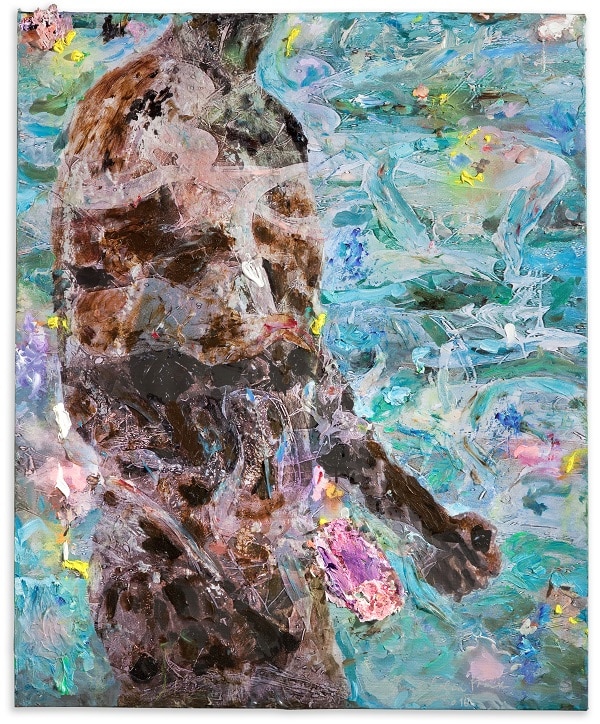 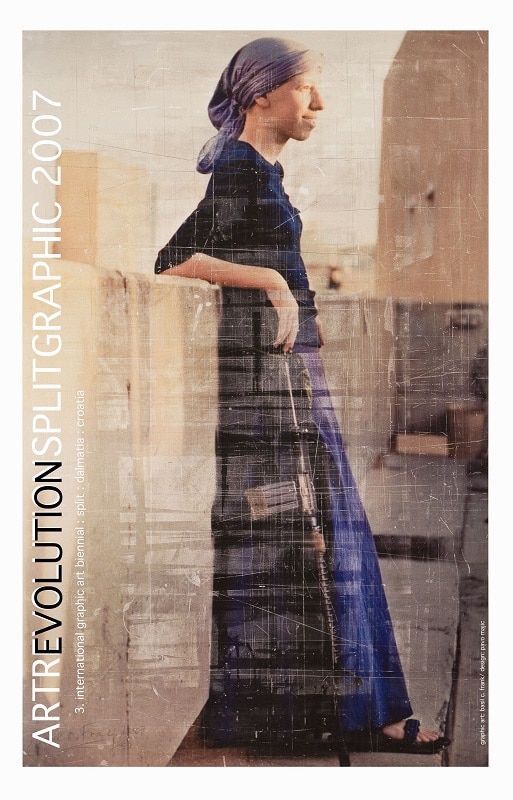 SPLITGRAPHIC 2007 l SPECIAL AWARD SPLITGRAPHIC BIENNIALE 2007 Maiden with an M16”( Maiden with a Gun/girl with a Turban’)
110x70cm
2007 Photography, digital work, inkjet
A photograph I shot in Jerusalem posed against a wall –signifying, masculinity, division, terror in an area of conflict. I observed a parallel significance to Vermeers ‘Maiden with a Pearl Earring’, in this instance the turban is not worn as an exotic costume as in 1660 parading the ‘clothing of the enemy’ but as a religious veil to hide, guard her sexuality. The turban (veil) being a ritual of Islam, Judaism and Christianity. The gun replaces the earring as her life support system.
http://www.splitgraphic.hr/o-nama?lang=en
The Spligraphic awards were received by the renowned names in graphic art: Vasko Lipovac, Masahiro Fukuda, Hugo Besard, Yoshio Imamura, Davida Kidd, Basil C. Frank, Nevenka Arbanas and Maja Franković, Mirjana Vodopija, Janice Wong, Brita Weglin, Hishasi Kurachi, Ingrid Ledent, Marta Lec 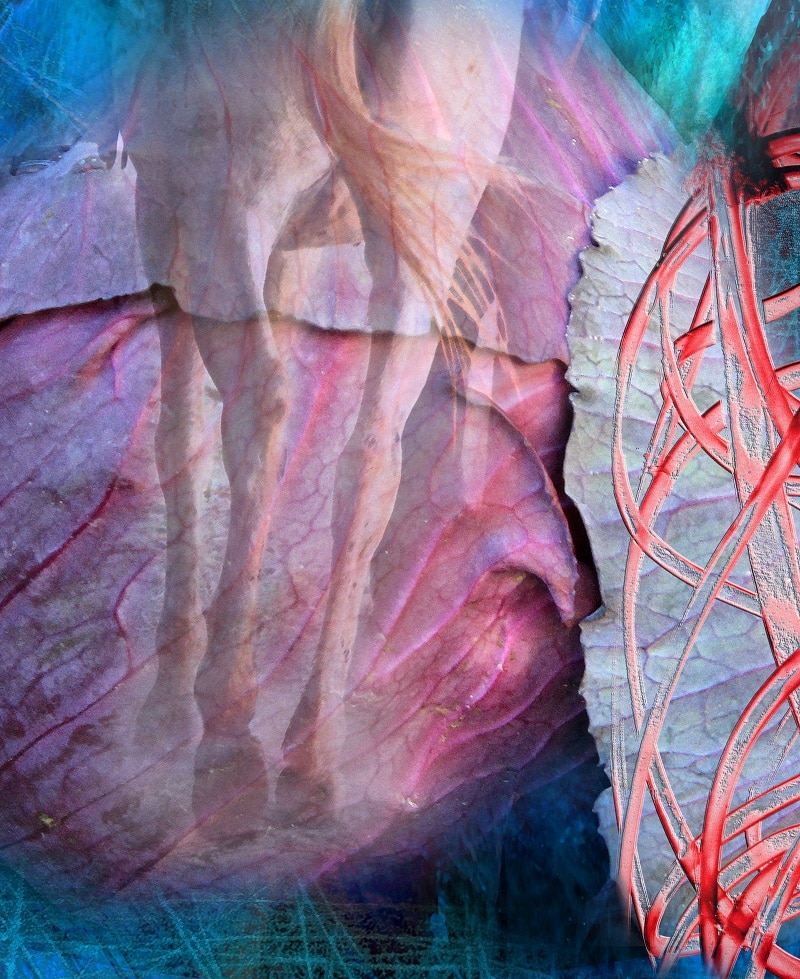 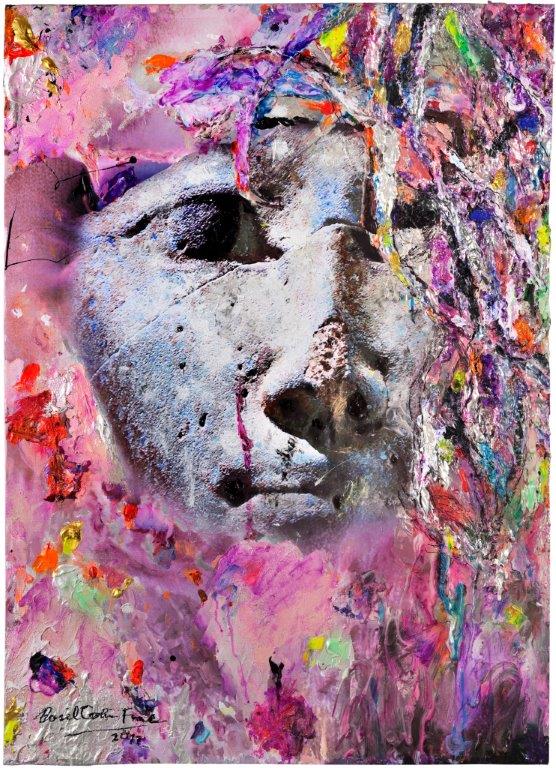 Dear Basil Frank,
Thank you for nominating for The Global Art Awards 2017 in association with The Wall Street Journal. Once again the volume and quality of the entries has been extraordinary with so many incredible talent.
I am delighted to inform you that you have been shortlisted and in the final for The Global Art Awards 2017. This is a truly fantastic achievement! Congratulations!
The Awards
The awards ceremony will take place on Friday 17th November 2017 at the Armani Hotel Dubai, Burj Khalifa at 20.30pm. You can enjoy the Art Exhibition from 16.00pm.
Schedule
Friday 17th November, 2017 | Armani Hotel Dubai Ballroom
16.00 pm | Art Exhibition curated by MEACA. 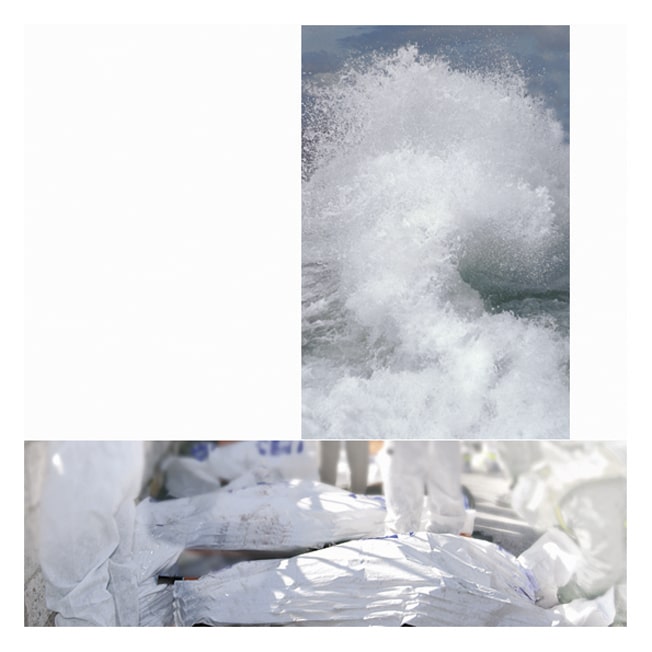 Tchera Niyego, the curator of the “White” show at the Broadway Gallery, NYC, happens to be a woman of style and substance. Luckily for me, the show lived up to what I have come to expect from her (because there is nothing worse than having to face a beautiful woman and tell her she’d better get a day job). This is her fifth show—and I eagerly look forward to her next. The choices she made were impressive—impressive most notably for their cohesion, their absence of pop and shock value, and the stark grace of what can only be defined as confidence. Artists gathered: Keith Morant, Basil C. Frank, Alfredo Sabat, Alice Flight, Minako Yoshino, Norbert Schmitt, Irina Urumova, Aviva Beigel, Allan Buitekant, Al Lewis and Fuge Demirok

Israeli-artist Basil C. Frank ’s work is so powerful and sorrowful that I had to catch my breath. His interpretation of the wave made famous during the failed Cuban friendship concerts of the 70s, and the stark reality of more recent casualties wrapped in white beneath—of dreams deferred beneath irrepressible progress, of celestial light and terrestrial futility give name to the statistic—pay respect to the forgotten and memorialize with a tenderness certain to be lost in the half-billion dollar American extravaganza all the politicians in our country keep claiming we’ll someday see. 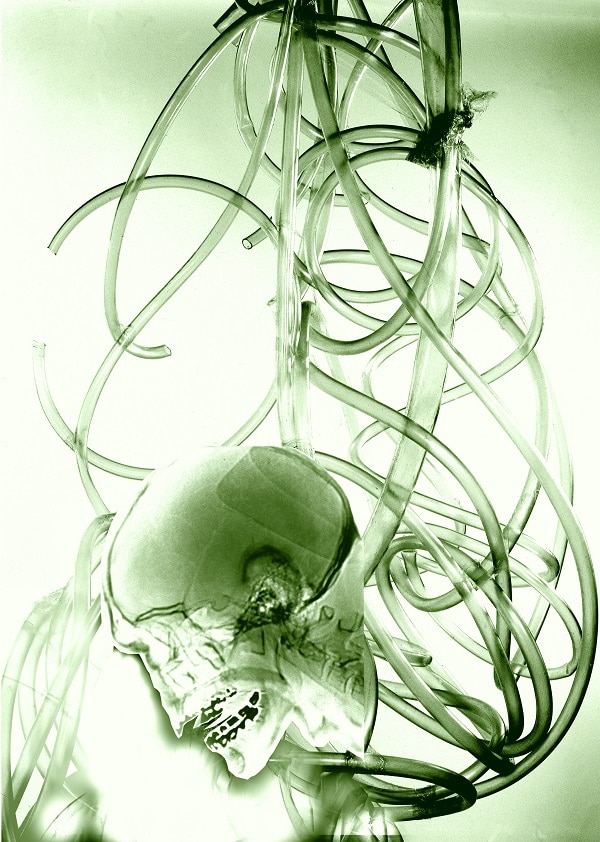 ” People talk sometimes of bestial cruelty, but that is terribly unjust and offensive to beasts; a beast could never be so cruel as a man, so artistically cruel. The tiger only tears and gnaws, that’s all he can do. He would never think of nailing people by the ears for an entire night, even if he were able to do it.

The twentieth century served as the cruel stage of wars, genocides, and violence of extraordinary proportion and intensity. Hence the epithet “the century of darkness”, which the Bulgarian philosopher and essayist Cvetan Todorov used on the occasion of the conference History, Truth and Justice: the Crimes of XX Century[1] that took place in Siena. The intention of this international event was to merge different levels of interpretations, which, although often influencing each other, had never been compared in a systematic manner. The conference tackled an historical analysis of crimes and acts of violence inflicted by states, examined the role that memory and morals played in the reading of the twentieth century, and examined the difficult relationship between international and collective justice in both people and institutions. It is also thanks to literature, film and art that today we can gain a better understanding of the atrocities that occurred in the past century: some poignant examples are the Shoah, the atomic bomb on Hiroshima, and the brutality endured by indigenous populations. These phenomena, which shook public opinion and contemporary conscience, profoundly changed what can be defined as “the anthropological self-perception of the contemporary world”. In the 1980s the exhibitions Primitivism in XX Century Art and Les Magiciens de la terre (The Magicians of the Earth), which took place respectively in New York and Paris, accelerated post-colonial debates on the arts, bringing about a renewed interest in an old problem.

With his photographic, digital, and sculptural works, the Israeli artist Basil Colin Frank prompts us to reflect on man’s cruelty, violence against the individual, social and political conflicts, racial discrimination – all of which profoundly mark our time. Basil’s exploration of these themes steers clear of moralistic and rhetorical stereotypes. The 2009 work Have you seen the Cape (Het jy die Kaap gesien) uncovers the deep contradiction between the bergie, the homeless population of Cape Town, and diamonds, the precious mineral resource of the Southern hemisphere: against the backdrop of Table Mountain, the site of ancient settlements as well as civic and political symbol of the city, emerges the figure of a poor man and the outlines of the precious stones. This sharp dichotomy is reminiscent of Lorna Simpson’s Waterbearer (1986), which exposed the condition of many black women as victims of both racism and sexism. The object of Basil Frank’s criticism is apartheid, the hateful legislative system that emerged from the 1948 South African elections; apartheid forced the majority of the black population to carry a passbook to enter white areas, banned interracial marriages, discriminated against people of colour in both education and the workforce. The system of racial segregation of public infrastructures and services – from educational institutions; schools, the post office buses and public amenities, to benches, public toilets and beaches – was institutionalized as an integral part of the Apartheid racist regime enforced through legislation. This shameful policy of separation, first brandished by South African minister DF Malan [2], was definitively dismantled in 1994. This was the year when Nelson Mandela, undisputed leader of the black minority, imprisoned for close to three decades, was at last freed and later elected head of the free (but not yet peaceful) State of South Africa. In his 2008 Red Bride piece, the artist condemns the violence inflicted on women and children, with particular attention to the countless cases of physical maltreatment, persecution, sexual abuse and genital mutilation in Pakistan, Darfur and South Africa: the photographic image, revisited in digital form, evokes the human body in extreme conditions. This work brings to mind Eva Hesse’s 1969 Contingent, a series of latex, fibreglass, and cheesecloth constructions alluding to the human body from a proto-feminist stance. In Transmutation Basil Colin Frank examines the ancient notion of alchemical transmutation, transferring this idea from inanimate objects to the human soul. Amid a vortex of tiny tubes resembling bones is a skull; perhaps this is the X-ray of a soul and a conscience finding a second life and renewed dignity in a super-terrestrial dimension.

1. An interview by Eve Kask at the Tallinn Print Triennial 2007

2. An interview with Krzystof Siatka, the Phoenix’s Throne at the MTG Krakowie Grafik 2006

3. An interview with Charles Rump at the Beijing Biennale 2005.

Click here to read the original article in German